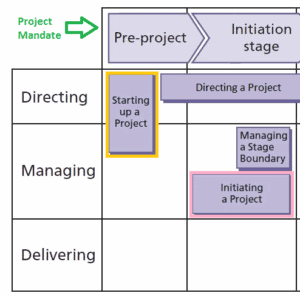 What is Starting Up a Project and why do we need it?

Organizations always have lots of ideas for projects. They might be well thought out or they might be a mad scheme the CEO thought up on their last overseas trip. The ideas themselves might be clearly documented (they could be part your corporate objectives for this year) or they might be just “back of envelope” stuff. PRINCE2 calls this initial information the Project Mandate and I’ve added it to the graphic, which comes from the PRINCE2 manual Whatever the idea or information which triggers a potential project, this Project Mandate needs a sanity check before you start spending money and committing resources to a full scale project So that’s what SU if for. It exist to answer one question: “do we have a worthwhile and viable project.” The SU chapter actually says that it is as much about stopping daft ideas as ensuring that good ones go forward. Starting Up a Project should be short and inexpensive relative to the project itself and aimed at answering the “is it worth it” question, at a high level.

So where does Initiating a Project come in?

If, after SU, the Project Board decides the project is worth doing, then it is worth doing well. That’s what IP is for – to build on the work done in SU and to plan out a (now worthwhile) project in detail. As you can imagine, there’s a relationship between the amount of planning and the chance of the project succeeding, so PRINCE2 dedicates Stage 1 – Initiation, to this important task So, in IP, we flesh out things begun in SU: the outline Business Case becomes a full business case, the Project Brief document is expanded into Project Initiation Documentation for example. The work done in SU is not wasted

What if a Project is not worth doing?

Using SU you get a chance to walk away before any harm is done. This is because the project hasn’t started yet – so you’ve nothing to close down and you haven’t used up too much time and resource. You can just file the documents and move on.

What about small projects then?

Fair point. PRINCE2’s double start can seem like a bit of an overhead in small projects. But remember that one of the PRINCE2 Principles is “Tailor to suit the project environment.” PRINCE2 is very flexible so, in small projects, you can combine SU and IP into one. You still do the same work – SU’s “is it worth” question still needs answering – but you can merge it with the IP activities and just send the Project Initiation Documentation to the Project Board and ask them to authorize the project. So a PRINCE2 project has an evolved or rolling start. In Starting Up a Project we ask “is it worth it.” If it’s not, we can back out with little time used. If it is, then the detailed planning in the Initiating a Project process is justified and will get your project off to a good start.